Over the last three years, the leading aircraft interior and transport design studio has worked closely with United as their strategic partners to develop a comprehensive global re-brand that is seeing a complete overhaul of the passenger experience, from lounge to landing.

From a nose to tail re-design of both domestic and international aircraft interiors, through lounges with bespoke seating and finishes, to airport environments, digital media, inflight meal service items, menus and a plethora of other details, PriestmanGoode has generated a language of quality and refinement for United Airlines. 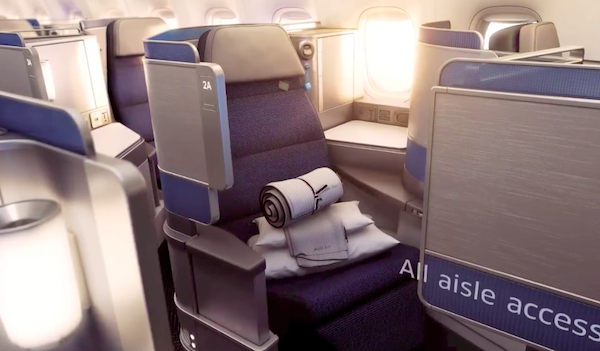 Unveiled in New York City on 2 June 2016, the new designs for the international fleet focus on a brand new premium experience for business travelers: United Polaris. Following extensive research and passenger studies, this new exclusive offer is tailored to United business passengers, providing them with a serene environment that will leave them feeling refreshed and rested.

PriestmanGoode’s designs range from the lounge to all elements of the onboard experience including seating, bespoke furniture elements like a bar area, branded cabin elements and a host of details including new tableware, glassware and amenity kits, among others.

Nigel Goode explains ‘At PriestmanGoode we design products and environments that elevate brands and shape outstanding passenger experiences. We have been working in close partnership with United Airlines to create a holistic, refined, human-focused journey. The new cabin and brand identity are the physical embodiment of United Airlines’ new philosophy, which keeps the passenger at its heart, and rather than merely move passengers around the world, aspires to move the world forward. Our new designs will align the airline’s many products across the entire fleet, and provide a consistent, passenger-focused journey from home to destination.’

PriestmanGoode designed a whole series of products for the new United Polaris cabin, every element of which is intuitive to operate. Designed as part of a greater whole, each element combines to result in a peaceful, restful cabin environment.

The United Polaris cabin includes an entirely new premium seat, based on an original, patented seat layout concept invented by Acumen,which United is the exclusive North American licensee for. PriestmanGoode then led the strategic development and the creative direction of the concept into a unique United Airlines product with distinctive features including integrated personal stowage with latching door, headphone hook and mirror, a do not disturb feature, bespoke reading light, large solid surface cocktail table and unique trim and finish including the latest innovations in aviation materials. The intuitive lighting and seat controls can be operated from any position and give passengers greater control of their environment.

PriestmanGoode’s designs for the United Polaris cabin also include:

United Polaris will be available on selected international flights from December 2016.

MANILA, Philippines – United Airlines is looking at growing its market share in the Philippines as it is carefully studying other possible destinations from Manila including San Francisco.

United Airlines Philippines country manager Maria Concepcion Perdon said in a press conference that the airline is looking at growing its four-percent market share in the Philippines.

“Right now we have a four-percent market share and we hope to grow it. The Philippines is a very important market for United that is why we have been here for 30 years,” Perdon said.

The airline flies to Guam and Koror in Palau 13 times a week using a Boeing 737 aircraft.

“The Manila-Guam route has been profitable for us. There are many Filipinos living in Guam,” Perdon said.

According to her, United Airlines has a load factor of 80 percent for its operations in the Philippines.

She explained that United Airlines is looking at getting the share of Hawaiian Airlines that stopped servicing the Manila-Honolulu route a few years ago.

United Airlines vice president for sales in Atlantic and Pacific Jake Cefolia told reporters that the airline is studying opportunities in the Philippines including the possibility of flying to other destinations in the US including San Francisco.

“The Manila-San Francisco route is always on the drawing board,” Cefolia said.

He pointed out that the airline is looking at growing its businesses in the market where it has presence below the gross domestic product (GDP) growth to avoid overcapacity.

“We intend to keep the capacity growth between the level of GDP growth in the markets that we serve because we want to keep from a situation wherein there is more supply than demand,” he added.

According to Cefolia, the airline would have to carefully study opportunities in the Philippines.

“There is a tremendous among of demand, sometimes it seems insatiable demand in Manila. It is the highest volume market between Asia and the US. However, it is also an incredibly price sensitive market,” he said.

Cefolia said the airline is in the middle of a refleeting program and is scheduled to take the delivery of 34 brand new Boeing aircraft including the B787-9 Dreamliner as well as 50 new Embraer 175 aircraft.

United Airlines has announced it will partner with AmeriCares, the American Red Cross and Operation USA to help raise funds for the tens of thousands of people affected by Typhoon Haiyan in the Philippines. Chicago-based United (NYSE: UAL) also said it will offer customers a gift of bonus MileagePlus miles if they donate funds to the relief effort.

The United Airlines Foundation will donate up to $50,000 to match donations to the carrier’s partner organizations involved in Typhoon Haiyan relief efforts.

Said Mark Anderson, United’s senior vice president of corporate and government affairs: “Our hearts go out to the people in the Philippines as they recover from this devastation. In difficult times like these, our employees and customers always show their generosity.”

United Airlines will have two additional flights to the Philippines.

United will be adding daytime non-stop flights on Tuesdays and Sundays beginning Nov. 12 to Manila’s Ninoy Aquino International Airport, according to a press release sent out on Thursday.

The new flights will be operated using Boeing 737-700 planes, with 12 seats in United Business and 112 seats in United Economy. Flight UA191 will depart Guam at 5:25 a.m. on Tuesday and Sunday and arrive in Manila at 7:20 a.m. the same days, according to the press release.

The release also stated that additional flights will increase the frequency of non-stop flights between Guam and Manila to 11 weekly, in addition to twice-weekly one-stop services via Koror, Palau.

“We are excited to increase direct service between the Philippines and Guam, in response to customer demand,” said Sam Shinohara, United’s managing director for business development in Asia-Pacific.

“As Guam’s hometown airline, United continues to make investments on the island and to seek opportunities for growth.”

MANILA, Philippines – A United Airlines flight bound for Guam returned to the Ninoy Aquino International Airport (NAIA) in Manila after experiencing mechanical problems while on air on Wednesday.

NAIA-Media Affairs Division reported that Flight UA 184 was earlier scheduled to depart from Manila to Guam via Honolulu, Hawaii at 10:00 p.m. on Tuesday, but was delayed for 33 minutes.

Its pilot, however, was forced to maneuver back to NAIA after the plane’s right engine overheated.

The aircraft touched ground at NAIA Terminal 1 at 2:51 a.m. on Wednesday.

None of the 125 passengers was reported hurt.

The airline billeted some passengers in nearby hotels or asked them to rebook to other flights.