Those following airline-related controversies might have noticed news items over the last week about an unfolding row between now temporary allies Philippine Airlines and Cebu Pacific and Emirates, one of the biggest carriers in the world.

The quarrel has to do with seats between the key Manila-to-Dubai market—a lucrative route given the importance of the Middle East when it comes to ferrying Filipino workers.

This specifically covers one of three Manila-Dubai daily flights that both local players said Emirates should stop using since an Emirates-PAL codeshare deal was scrapped months ago.

What irks these carriers the most is that the Philippine government is still allowing Emirates the use of these flights as two 30-day extensions have now been given, the latest of which ends Dec. 26, ruling out a chunk of that Christmas traffic for PAL or Cebu Pacific.

Adding insult to injury is the alleged sale by Emirates of those seats beyond Dec. 26, which could be illegal. Requests for a cease-and-desist order on the sale of those seats have since been sought against Emirates.

Naturally, in cases where a situation becomes hard to explain, we are now hearing speculation that Emirate’s “confident” attitude is because of its relationship with someone with ties to people at the very top.

A source even cited the one-time Manila-Dubai flight of an Emirates Airbus A380 last Oct. 7, a late night event but one that President Aquino found time to attend.

Civil Aeronautics Board (CAB) Executive Director Carmelo Arcilla said a decision should be out by Dec. 11. Needless to say, an unfavorable CAB decision for domestic carriers could trigger some turbulent skies ahead.—Miguel R. Camus

It could very well be a sad holiday season for the employees of this particular airline, which continues to lose money (or more accurately, is losing even more money nowadays).

Biz Buzz has learned that the management of this airline—which is a budget-oriented sister unit of a larger carrier—told its employees some weeks ago that they should not expect a Christmas bonus this year, no thanks to the red ink that still hounds the firm. 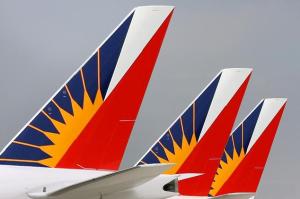 Of course, all employees would still receive the mandatory 13th-month pay, but the traditional 14th-month bonus (a policy that held until last year as previous managers wanted everyone to be happy), will no longer apply to all. Only the employees of the parent firm would get the extra month’s pay, leading some insiders to lament that other staffers have reverted to their second-class citizen status.

But more alarmingly—especially for the loyalist clients of the airline—is that the groups’ overall on-time performance has dropped precipitously over the last couple of months.

From an average on-time performance of 86 percent, this carrier’s aircraft now leave terminal gates on time at an abysmal rate of 35 percent. That’s a huge drop, by any measure, and no one seems to know why?

Is it because of a reorganization, low staff morale or perhaps bigger internal problems? Your guess is as good as ours.—Daxim L. Lucas